Chocolate muffins and oregano: Can plant-based preservatives replace chemical ones?

American consumers are becoming much more aware of the chemicals in their food– and the potential danger they pose. At the same time, plant-based diets and plant-based nutritional supplements are taking off. Ipsos Retail Performance, a British retail analytics company, says that 9.7 million Americans are now on a plant-based diet.

There are many examples of potentially harmful chemical additives. A recent article in USA Today says that tert-butylhydroquinone (TBHQ), a preservative used to extend the shelf life of over 1200 foods, could harm our immune systems. The Environmental Working Group notes that TBHQ could also affect how our bodies respond to the flu vaccine and could be linked to an increase in food allergies. PubChem notes that TBHQ is also used in automotive care, building construction, fuel, paint, and printing, among other areas.

Are there natural alternatives to chemical preservatives? Yes, there are. They include green tea extract, rosemary extract, the kakadu plum, oregano, vinegar, and others.

We looked in Foundation’s Publications database to see what has been published on the topic of plant-based extracts and food preservatives generally. We found 665 publications.

Publications on plant-based extracts and food preservatives from 2011 to 2020.

Some of these publications include:

We also drilled down to see what’s been written about specifically on green tea extract, rosemary extract, oregano, and kakadu plums.

Publications on green tea extract and food preservatives, for example, have been steadily increasing since 2012 with dips in 2018 and 2020 and a peak in 2019. Will publications begin to rise again in 2021 as more of us become intrigued by plant-based options?

Publications on green tea extract and food preservatives from 2011 to 2020. 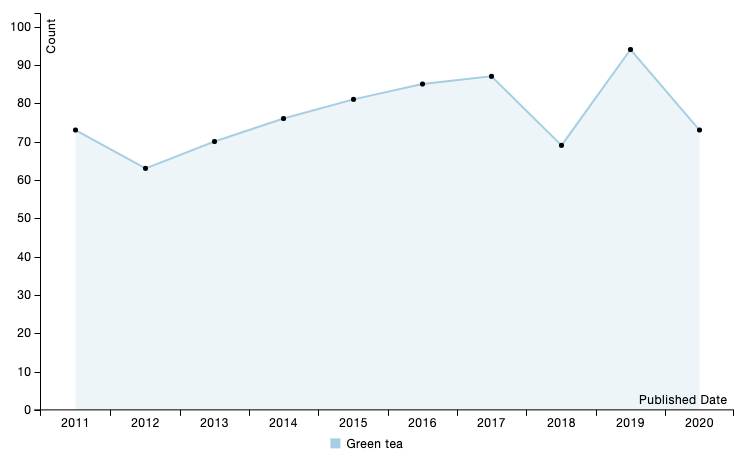 Within the Publications database, we found these articles about oregano, rosemary extract, green tea extract, and food preservation:

We were also interested in learning more about the kakadu plum, a food native to Australia. We found these publications:

There have been a number of patents related to plants and food preservation. Here’s a snapshot of what we found in Foundation’s Patents database:

In our search, we discovered that there was even a patent from China involving rosemary extract and silkworm cocoons:

Plant-based options for food preservation are becoming more and more popular as Foundation showed us. Will plant extracts ever fully replace chemical preservatives in our food? That remains to be seen.

To learn more about how Foundation can help you make connections, schedule a demo or click "Let's talk" below to connect.