How Did Deutsche Bank Wind Up with a Huge Pharma Patent Portfolio?

Mallinckrodt was one of the oldest and largest pharmaceutical companies in the world, but is currently in a comprehensive Chapter 11 restructuring due to its potential liabilities from the opioid crisis. Bankruptcies and restructurings often lead to significant changes in patent ownership, and ResoluteAI’s Foundation service provides several tools to identify and analyze patent transfers.
One indication of where patents have changed ownership is when the applicant name is different than the assignee name. In some cases, companies deploy their patent portfolio as collateral against loans, and the financial institution that has provided the loan subsequently becomes the patent assignee or co-assignee.
This Sankey diagram illustrates Mallinckrodt patents which have been reassigned. For a significant number of patents, the assignee is either Wilmington Savings Fund or Deutsche Bank.

Foundation also facilitates a deeper dive by showing the tags associated each of the patents that have been transferred. The Sankey here lists the tags on patents assigned to Deutsche Bank. It will be interesting to see the value and ultimate home for the hydrocodone, fentanyl, and oxycodone patents Deutsche Bank now owns. 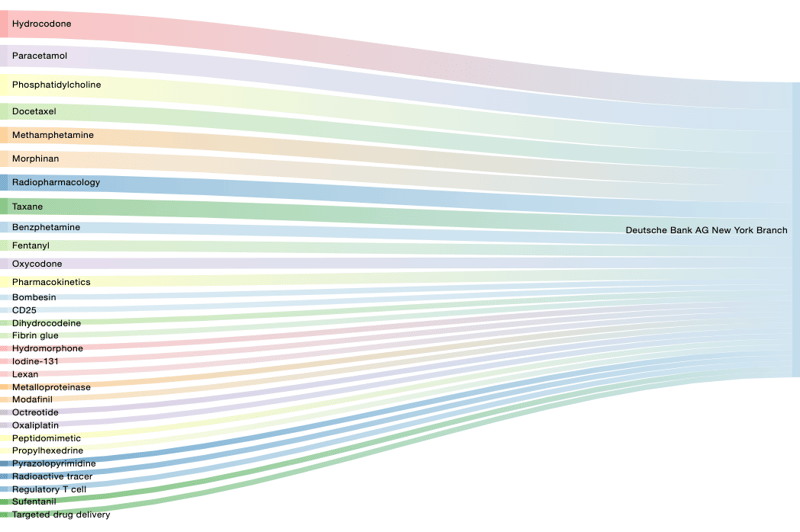 This is but one example of how high level insights into transfers of technology can tell a much larger story about the financial health of a company, as well as how to understand financial data that is only derivable from patent reassignment analysis.